Many factory automation (FA: production factory) facilities use sequence control. The control device that controls that is called PLC (Programmable Logic Controller: commonly known as sequencer) is used, and many of them are described by ladder circuits (some language description is also included). I would like to explain sequence control and ladder circuit.

What is sequence control?

Sequence control is a control for performing sequence operation, “control that advances through each step of control with a predetermined order and exchange”.
“It is extremely used in production plants with control that moves all the way by faithfully observing a predetermined series of movements.”
Also, in production factories, there are many PLCs of the type to describe with ladder circuits which are relatively easy to describe because there are many cases where specification changes and control of control are required, as it is necessary to make facilities and movements peculiar to that production.

What is a ladder circuit?

As I mentioned earlier, factory automation (FA) is often required to change specifications and versatility.
Meanwhile, The ladder circuit is a kind of visual program that made it possible to program the program visually.

As an example, we will create a circuit by combining the following pictures to sequence operation.
However, detailed settings and functions of this visual also differ depending on PLC manufacturer.
· A contact (ON when passing)

· Coil (ON when circuit is connected)

Before creating a ladder circuit

Basically, PLC is sequenced as input and output as relay as externally exchanged.
Therefore, each PLC has a hardware connection destination.

These differ depending on the manufacturer of the PLC and the software of the ladder circuit.
Behavior of input and output is related to control of direct operation.

Flow of operation of ladder circuit

The following is an example of a program drawing.

Since it is flowing from input to control via control, if there is input, we will process immediately and go out. (Processing ends within one cycle)
If this order is ambiguous, it takes several cycles from control to output and takes time to output.
(The cycle depends on the PLC and the program amount, one cycle: several μs to several tens of ms)

Therefore, let’s write from the top like ladder circuit description order like “input” → “control” → “output” .
The following is a program drawing, and a space describing a ladder circuit 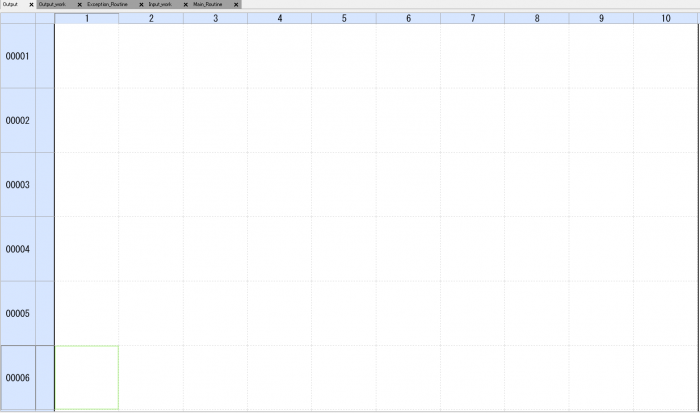 I will explain basic usage of the ladder circuit.

AND circuit and OR circuit (series circuit, parallel circuit)

It becomes the basic circuit in the basic.

NAND circuit and NOR circuit

· NAND circuit
As you can see from the table below, the coil turns off when all the switches are ON.
Therefore, it can be made by setting the switch to b contact in parallel.
It is the reverse of the operation of the AND circuit. Therefore, it is also possible to make an AND circuit and make the coil NOT circuit.

· NOR circuit
As you can see from the table below, the coil turns ON only when all the switches are OFF.
Therefore, you can make it by turning the switch to b contact in series.
It is the reverse of the operation of the OR circuit. Therefore, it is also possible to make an OR circuit and make the coil NOT circuit.

The NAND circuit is the reverse of the AND circuit, the NOR circuit behaves in the opposite direction of the OR circuit

It is also called exclusive OR circuit.
Although it may not be used much, you can express the behavior as shown in the table below.
When either switch 1 or 2 is ON, the coil turns ON (exclusive) circuit.

The XOR circuit is used with exclusive control.

I will explain the self-holding circuit.
Also called a self-hold circuit, A circuit that continues to turn on the coil regardless of releasing the switch (switch OFF) once it is pressed .

I will explain the flow of movement.
When the switch is pressed, the coil is connected and the coil turns ON. Then turn on the coil switch.

Since the coil was ON at the previous cycle at the next cycle, the coil switch is turned ON.
The switch will be connected to the coil and the coil will continue to turn ON.
The ON / OFF of switch R20000 does not matter at this cycle.

Also, in terms of using coils, be careful with double coils.
If there are two or more coils with the same output name, it will not work properly.

The coil can be kept ON with a single switch operation. However, note Deadlock

The set / reset circuit is a circuit that holds itself. Therefore, ON is set and OFF is reset.
It is the same as the self-holding circuit and how to draw it is different.

Let’s take care with resetting so that you can not control due to deadlock (the coil can not be turned off).

When using the set / reset output, let’s make the reset output at the same time after putting the set output.
Doing so prevents deadlocks. Moreover, it can prevent forgetting to move.

The alternate circuit repeats ON / OFF alternately each time you press the switch.
It is also called a flip-flop circuit.

I will explain the move from OFF → ON.
Turning ON the switch turns ON only one cycle scan pressed with the rising pulse. Coil turns ON at that timing.

The rising pulse of the switch is cut off at the next cycle.
However, because the coil is ON at the previous cycle, the coil switch turns ON and self-holding is applied.

Coil ON / OFF switches each time the

The following books are easy to understand in detail as sequence control.
Please refer if you do not mind otherwise.
図解入門よくわかる最新シーケンス制御と回路図の基本 (How‐nual Visual Guide Book)

I think that sequence control will be done step by step when program is written by ladder circuit.
By controlling step by step, control will progress one after another.
I will briefly explain the stepwise sequence movement at that time.

If you want to process with only the first stage processing, you can connect it next to move with AND circuit of “MR001: a contact” and “MR002: b contact”. 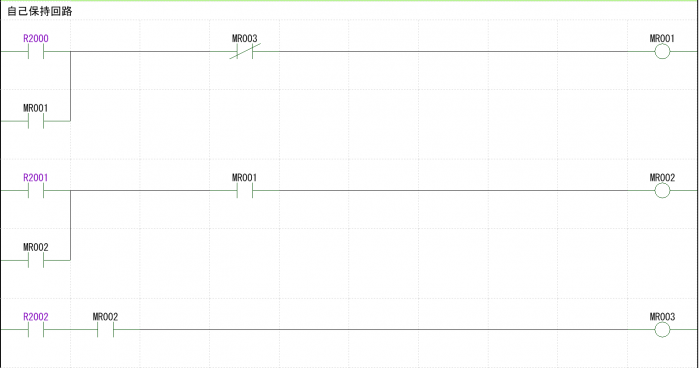 I will explain a little bit about what I am careful about when I draw a ladder.
· Reduction in the visibility of parallel circuits
· Separate from command, interlock, output
· In case of solenoid valve control by output

Reducing the visibility of parallel circuits

Write a parallel circuit as follows.
However, as the number of switches in the parallel circuit increases more and more, the circuit grows vertically and it becomes very hard to see in the visual program.

In that case, you can create an equivalent circuit as follows.
To make the parallel in series The AND circuit and the NOT circuit make it the same circuit.
It will be a little hard to understand, but as a program it will be very easy to see.

Reduce mistakes by making ladder circuits as easy as possible

I said basic is to make inputs and outputs as simple as possible. (Human error, prevention of bugs)
Besides that, there are caveats, basically we will draw in mind the prevention of malfunction.

• Do not use motion commands as output.
I think that there is no problem even if you use the place where malfunction does not occur also as it is.
Use interlock (monitor / judge the state where operation is possible).

Always monitor and judge the condition for the output operation.
Pass it to the output with command + interlock.


Use input / output for preventing malfunction

In case of solenoid valve control in output

It is a point of improvement when using single solenoid or double solenoid in output.
When controlling the double solenoid valve, I think that 2 point output is connected.
Depending on the control state, both OFF and ON one way ON, but normally both ON can not be done.
Therefore, it is a method not to make both ON as control.

Here, MR 100 (both output OFF) is making switch when you want to cut both.

With solenoid valve control, making a circuit with a double solenoid makes it possible to respond to changes immediately

The following books are easy to understand in detail as sequence control.
Please refer if you do not mind otherwise.