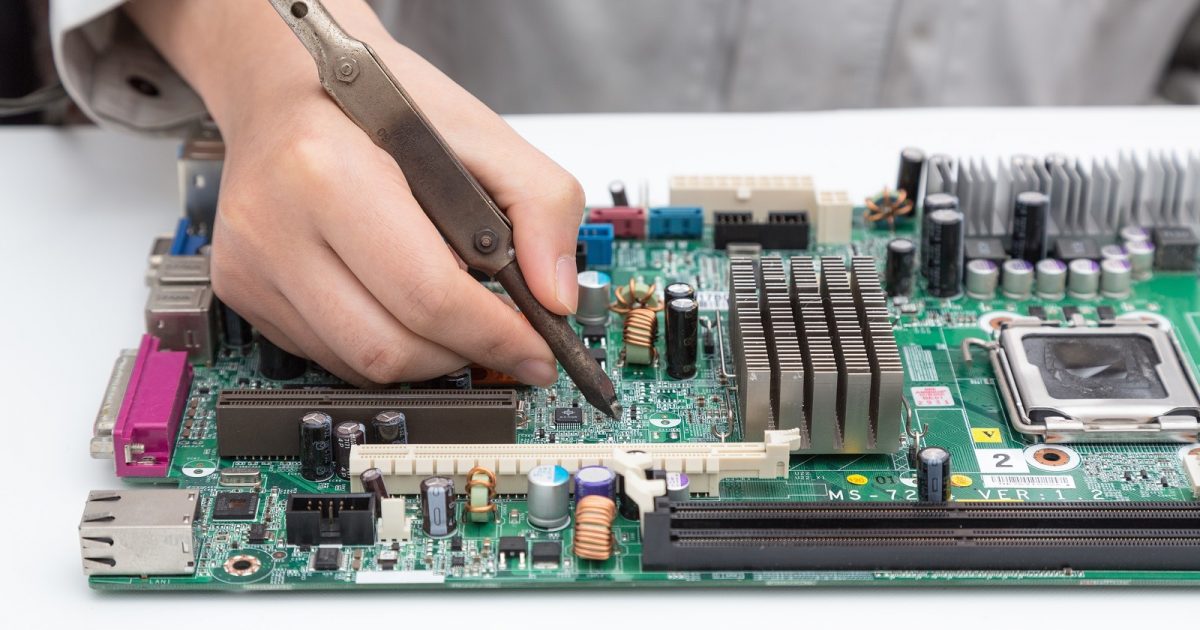 Manufacturing and process capabilities are inseparable edges. Although it may not have been heard, simply say, process capability is ability to express the probability of fitting within the product’s standards in making the product .
Based on the capability index, we will grasp the loss of products and determine the inspection frequency. This way of thinking is used and applied also in considering probability other than monozukuri. Before explaining that, I would like to talk about product standards for making products.

What are product standards?

There are standards for product manufacturing. For example, assume that a 100 cm stick is a product. There is no problem if the products are all 100 cm, 99 cm or 101 cm etc will come out on making. 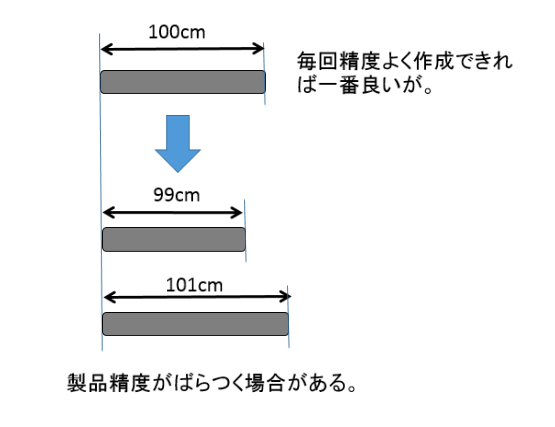 However, if the product can be released as a product, for example, 99 cm to 101 cm, the product can be put out to the world if it is 100 cm ± 1 cm. At this time “± 1 cm” is the standard. If it is 98 cm, it becomes a defective product and it becomes a manufacturing loss.
By stochastically obtaining variations (measured several products) for this standard, we can figure out the number of product losses and lead to quality assurance. We use a normal distribution to determine the number from the probability at this time.

What is a normal distribution? 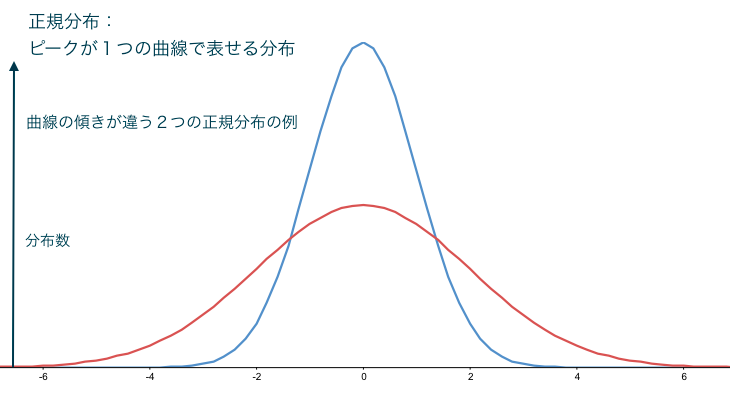 Shape of distribution in probability. The distribution of the nature world will converge to the shape of this graph if there is no disturbance.

What is the standard deviation? 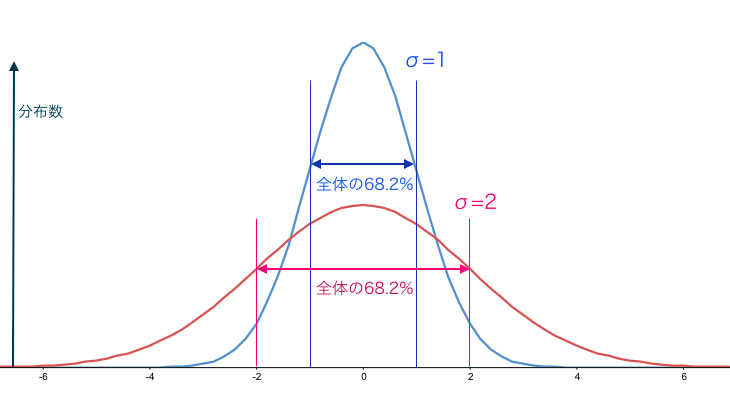 Even if there are n variations (99 cm, 101 cm in the previous example), you can not grasp the position of the graph by simply adding, subtracting, or just breaking out the average. How do you ask for it?
Therefore, in order to judge to what extent it is away from the center value, subtract the value which deviates from the center value μ.
(μ – 99), (μ – 100), … n pieces

Even if it is added as it is, we only calculate the center value, we weight the way of spreading (spreading). Apply the same value (squared)

Add all the values ​​and divide by (n – 1). This is the average value of the weighting of spreading.

We call this dispersion as σ ^ 2. But it does not match the graph unit so it will not be displayed on the graph. Square root to make it the unit of the x axis of the graph.

This is called standard deviation. This is a value that will be a measure of the dispersion.
Next, we will use this value to see how many can fit within the standard or not.

The way of thinking is statistical analysis. Please see this reference if you want to know more.
Process Capability Indices

I think that I do not know how much it is sensuously with the value of variation (standard deviation). Considering this as the probability or the number falling within the standard, it is necessary to compare with a reference value. The value to be compared is “CP value” .

Although the calculation is expressed like this, the meaning is “Cp = 1 and the center value μ ± 3σ is the same as the standard width”. The width of the same standard as ± 3σ has the probability of 27 defects out of 10000 (nonstandard) occur.

What is one-sided standard?

It is an index that considers only the upper limit side or the lower limit side from the center from the difference between the two side standards. Therefore, calculation is done with half of 3σ.

Upper limit one side standard

The way of thinking is the same, it is value taking into account the central deviation . Therefore, the one with the smaller value of one side standard becomes the CPK value.

Consider also the deviation of the “CPK value”

As a way of thinking, it is summarized below.

Before talking about setting values ​​that will set CP value and CPK value, we will briefly explain words related to Six Sigma (6σ) and PPM defects.
In the manufacturing industry, Six Sigma (6σ) or PPM is often used.

parts · par · million (one part per million) is called and is often used at the defect rate. For example, in 3PPM defective rate, the failure rate is 3/1000000. In the manufacturing industry, we often use this to express defective rates etc well.

Parts · Par · Million (one part per million).
It is often used with a value less than a percentage

In the manufacturing industry, we decided to slogan Six Sigma to lower the defective rate and create a good product. In its slogan “We accept up to 3.4 (3.4 PPM) defects out of 1 million.” Actually, 6σ is statistically “2 out of 1 billion”, which is a much lower probability than the slogan mentioned earlier. As the idea of ​​Six Sigma, 6 σ is taken into account, 1.5 σ is taken into consideration of blur such as deviation of the standard center from the average value to 4.5 σ “tolerance of defects of 3.4 (3.4 PPM) out of 1 million.

4.5 σ is a numerical value considering 1.5 σ for blur such as deviation of the standard center from the average value

The criterion of the CP value was ± 3 σ. (Center value μ ± 3σ is the same as the standard width and Cp = 1)
Compared with the concept of this PPM I tried to make it a table. However, it is the ideal defective rate of CP value (one side standard). In case of CP value (two-sided standard), the defect rate is doubled.


How to use Excel

Some people think that “Calculation is difficult, so it can not be used”? However, if you use functions in Excel you can easily obtain it. I will explain how to do it.

As an example, suppose you make a product of “100 cm stick” and measure 10 pieces. Ten measurements were written on lines 2 to 11 of the C column. We will calculate the process capability CP value and CPK value at this time. D line is the calculation content of line C. 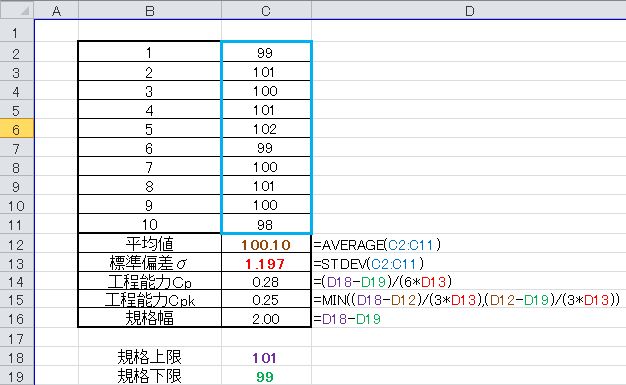 First, calculate the average value. We use Excel’s [AVERAGE function] for the mean value μ. (C Line 12 Line) I think that everyone understands this usage, but the range will be 10 measured values.

Find the standard deviation. The standard deviation σ is Excel’s [STDEV function]. It is a function that calculates the contents explained earlier in “Normal distribution and variation”. (C column, line 13) As well as AVERAGE, the range is 10 measured values.

We will calculate the CP value of process capability. It is the value obtained by dividing the standard width “standard upper limit – standard lower limit” by 6 σ as explained earlier in “Process capability index CP value”. (Line C, line 14)

We will calculate the CPK value of process capability. As explained earlier in the “Process capability index CPK value”, the smaller one obtained by dividing “standard upper limit – average” by 3 σ and the smaller “average – standard lower limit” divided by 3 σ as the one side standard becomes CPK value I will. (Line C, line 15)

If we summarize the order easily, we will ask in the following order.

Process capability in the management field

Likewise, it can be used depending on ingenuity in management.
For example,
·production quantity
· Standard work in process
· Workload of subordinates (overtime)
Such

Statistical method that can use process capability in various fields

We calculate the standard deviation as 10 and the average value as 50.

Easily made a list of deviation values.
However, these may be only Japan.

The following books will be helpful.
Please refer to those who want to know more.